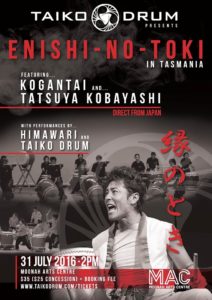 This concert was held on Sunday July 31 2016 at the Moonah Arts Centre, Tasmania.

A dynamic showcase of rhythm and movement, it featured performances direct from Japan by fellow taiko group Kogantai, and professional artist Tatsuya Kobayashi.

Kogantai and Tatsuya Kobayashi were supported by Taiko Drum, the performance arm of the Tasmanaian University Union Taiko Society. Also joining them on stage was Himawari, a Japanese group for drummers with Down syndrome.

Gallery of images below, by members of the Hobart Photographic Society. Photographer’s names are shown beneath the larger version of each photo.

An informal group photo, taken after the concert. Photo by Eric Graudins.

‘Taiko’ in Japan means ‘drum’. ‘Drum’, pronounced Dora-Mu in Japanese, was given the kanji reading of ‘tiger dream’, representing the uniquely Tasmanian story of the loss of our local icon, the thylacine. The presence of its spirit still holds a powerful place in our identity and respects the indigenous custodians of this land. More about us