Taiko Doramu (Taiko Drum) is the performance arm of the TUUTS, and have performed at a wide variety of multicultural events and community festivals around Tasmania.

Our training is on Thursday evenings in Moonah.
We welcome new members.

‘Taiko’ in Japan means ‘drum’. Around the world, taiko is fast becoming synonymous with powerful performance and the tremendous energy it exudes.

‘Drum’, pronounced Dora-Mu in Japanese, was given the kanji reading of ‘tiger dream’, representing the uniquely Tasmanian story of the loss of our local icon, the thylacine. The presence of its spirit still holds a powerful place in our identity and respects the indigenous custodians of this land. 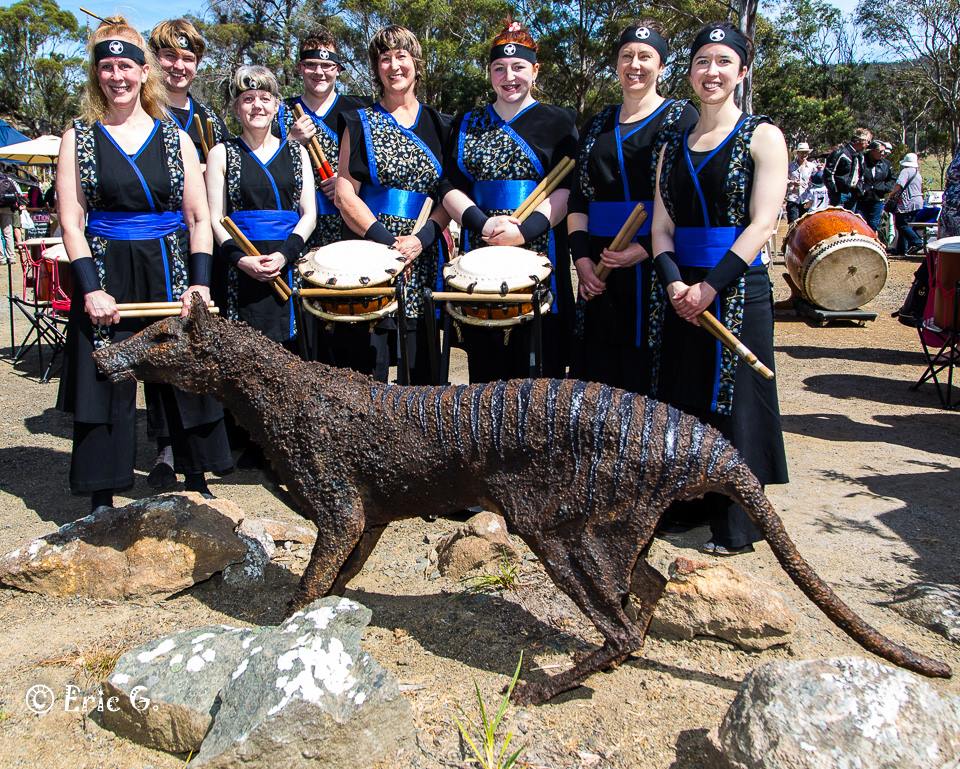 In Taiko Drum, we encourage taiko enthusiasts to experience the thrill of performing as an optional element of their taiko training. Performing enables members to challenge themselves and their nerves in front of an audience, and thus improve and hone their mental and physical skills.

The Tasmania University Union Taiko Society was formed in 2002 to create the opportunity to train, perform and teach the Japanese Art of the Drum.

We were greatly supported by the Australia Japan Society and the Japan Club of Hobart when we first launched our Society, and have continued strong ties to help promote this fascinating Japanese cultural tradition

We have evolved dramatically since 2002, and the demand for Taiko keeps growing across the state, with groups starting in Burnie and Launceston.

Or alternatively join us; we would love to see you at our next practice.

Japanese drumming, known as Taiko, is a visually spectacular art form, which originated in the festivals and rituals of the agricultural society of ancient Japan. Unlike other ‘high-cultural’ art forms such as the Kabuki, Noh Dancing or Tea Ceremony, Taiko culture is community-based, and the most widely practiced ‘popular-cultural’ art form in contemporary Japanese society. It is played as part of local festivals in virtually every district throughout Japan, and local Taiko masters have passed on its techniques orally for many hundreds of years. Most performers at such festivals are non-professional, local residents, and many of them are school children. Taiko plays a strong role in promoting a sense of community, and cultivating teamwork skills among the local residents.

Since the 1950’s Taiko has become internationally recognised as a  performance art, and many contemporary drumming groups have been formed in Japan and in many other countries. There are more than 8,000 Taiko groups in Japan, and many of them conduct international tours.

There are professionally established Taiko groups in mainland Australia, one of which recently performed in Tasmania, sponsored by the Japanese Consulate-General in Melbourne. Their performance at the City Hall in Hobart played to a full house of 300 delighted spectators.

Simon Vanyai lived in Japan for four years, studying the language, culture and architecture. Simon trained in the way of the drum with Art Lee, a professional Taiko musician and former member of Ondekoza, and Sacramento Taiko-Dan. He also travelled the country in search of the biggest, best, smallest, craziest, loudest, coldest, and generally most intriguing local festivals Japan has to offer, many of which incorporate Taiko drums in the celebrations, and feature rhythms passed on through generations.

‘Taiko’ in Japan means ‘drum’. ‘Drum’, pronounced Dora-Mu in Japanese, was given the kanji reading of ‘tiger dream’, representing the uniquely Tasmanian story of the loss of our local icon, the thylacine. The presence of its spirit still holds a powerful place in our identity and respects the indigenous custodians of this land. More about us